AD. Back in March 2016 I was pregnant with my first daughter, Daisy. Daisy is here now, and pretty healthy. Daisy is 15 months old now and this is the first time I’ve properly sat down to write a little about my birth experience. I want to talk to you about my own birth experience today. This post talks a little about some of the bad sides, but ultimately my daughter was the end result so that was amazing! 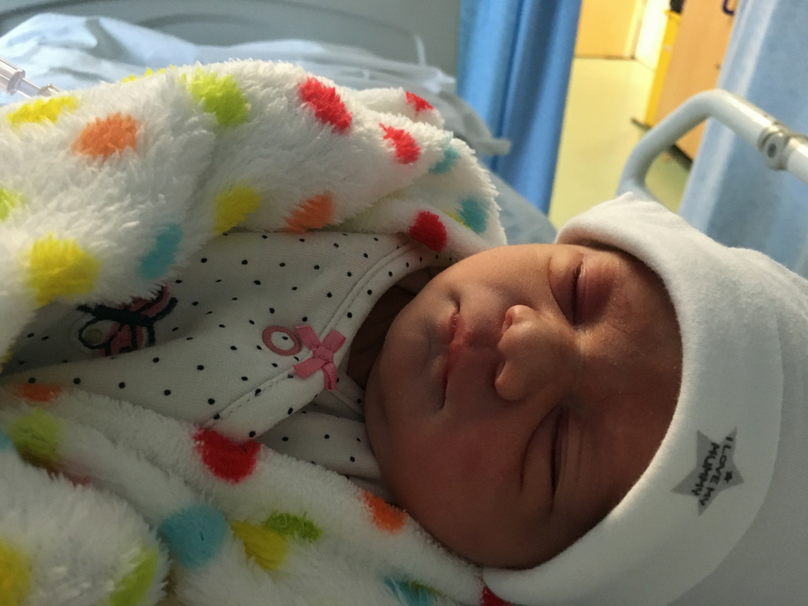 When I was first pregnant with Daisy I had some problems, and was told I had a 50/50 chance of a miscarriage. Naturally this meant that I was on edge. My blood pressure increased and I was put on bedrest for a period at around 8 weeks pregnant. I suffered hyperemesis gravidarum the whole way through and during my pregnancy I lost around 2.5 stone. My health was not in great shape but slowly I made it through the weeks. I hit 24 weeks pregnant and was relieved that my daughter was now classed as viable. Over the coming weeks I was having regular growth scans and seeing a midwife at home. Things were going great.

Once I got to 36 weeks, and had my last growth scan, the consultant was happy that I would be able to wait and have a natural labour. I was no longer classed as high risk. Then I got to 36+2 weeks and I started to notice that my baby was suffering from reduced movements at night. This was out of character. I went to the hospital at least 4 or 5 times before they began to take me seriously. One midwife told me that babies movements slow down near the end. This isn’t true. My blood pressure began to get higher and higher as I had more and more problems.

Does anyone actually listen to women talking about their own bodies?

It took from 36 weeks to 38 weeks to get the consultant to meet with me. I had another scan and this time it showed that my daughter’s growth had been static for at least 2 weeks. My daughter needed to be born sooner rather than later. Induction was to begin immediately. I began the induction process and I suffered an allergic reaction. This meant that my heart rate was all over the place and Daisy was suffering in my womb too. It felt awful!

This was the point at which the system began to fail me. Firstly I was requested to try the induction process again, despite it making me very ill. There seemed to be a miscommunication about the allergic reaction and another consultant requested that I try again. Repeatedly. I refused. Would you do something that would potentially put your baby at risk?

Tough luck for me?!

I was told that if I refused induction I would have to stay in hospital until my labour began spontaneously. Which could be weeks. I was basically being told tough luck for having an allergic reaction to the pessary used for induction. I spoke with my own obstetrician, as well as my one2one Midwife, and both suggested I request a c-section with the consultant on shift. At this point I was told that women can’t just request a c-section. Which is not true. I learned from NICE guidelines that women CAN request c-sections for a number of reasons, including anxiety. It was fair to say that I was suffering hugely with anxiety by this point. Having been told my daughter was in danger, and then being told that basically I had to just wait it out now in the hospital.

I persevered with my request and by this point I was 38+3 weeks pregnant. At 3am a different consultant came to see me and this time I was taken seriously. He instructed a midwife to sit with me, for 30 minutes, to hold the monitor in place to check that my daughter’s heart rate really was dipping. As I’d noticed for the last two days. Once the midwife sat with me, and the confirmation was made that her heart rate was erratic, I was taken for another scan. The consultant discussed my concerns about the induction process and told me that I should not be given another attempt at induction, as to do so would endanger both myself and my daughter. My c-section request would be accepted.

My daughter was in trouble!

The scan I had showed that my daughter had still not grown. Then the monitoring I was having picked up a further problem. My c-section request was no longer relevant. I now needed a c-section. By 1pm our daughter was born. I suffered placental problems along the way and lost a large amount of blood. Daisy weighed 5lb 13oz and avoided being in the SCBU – just!

For me personally I never thought about medical negligence claims. However I can see how the system manages to fail people at times. For me personally it took significantly longer than it should have to get someone to believe that I knew my own body. After my daughter was born I was told that she would not have made it to 40 weeks due to my placental problems.

If you suffered a difficult birth experience you may have grounds for a medical negligence claim. If you suffered a significant injury, which was at least partially the fault of negligent medical treatment, and are aware of the identity or institution who is potentially at fault then you could have a claim. It must be less than 3 years since the date that this was first realised.

My opinions of my birth experience

For me personally I feel that sufficient lessons were learned about the treatment of us and our birth experience. After my daughter was born there were apologies made and the consultant who kept refusing me things admitted he had made a mistake. I believe that human error is a part of life and I’m grateful that we made it safely and have both lived to tell the tale. Mistakes were made in my case, but I feel that they were resolved to my satisfaction. Who knows – one day I might even be mad enough to have another baby!

My birth experience wasn’t a great one. However, my daughter came from it. It was one of the worst times of my life as well as being the best one too.

Previous
The Must-Know Drills for Beginner Tennis Coaches (AD)
Next
How to earn free money with a cashback credit card
Click here to cancel reply.

Sending love from another mummy who feels very similar about our experiences.

Thank you so much! x

Ahh bless you! I bet the waiting felt like forever. So glad that you didn't have to be induced. The allergic reaction is REALLY rare and they said they were the first one they had seen that year (it was late March), so they must be rare indeed!

I know - it is ridiculous isn't it. I'm so glad I stuck to my guns!

Thank you so much. It was a really stressful time but I feel so blessed that she is here and we are doing great.

I felt so much better just for writing it down. Wish I had done it before!