If you’re a fan of a nice big breakfast, a full English as we call it here in England, then you’ll love being able to cook frozen hash browns in the air fryer! They are a DODDLE to cook. Super simple, much faster than the oven and they come out extra crunchy and delicious too.

Using the air fryer is one of my favourite ways to cook food in a hurry, and it has to be the best EVER kitchen gadget I’ve purchased. I currently use a Ninja Foodi OL750UK, but any model of air fryer would work great for this recipe.

I’ve had all sorts of kitchen gadgets but the air fryer is my favourite as it makes it faster to cook foods and things go extra crispy and delicious.

Cooking frozen hash browns, whether still frozen or defrosted, is so simple and takes just minutes, MUCH faster than cooking in the oven.

Next time you’re looking for a quick snack, something nice to accompany a special breakfast or even a tasty air fryer side dish, then be sure to try these air fryer frozen hash browns. The effort is so low, you just need to rip the bag open, pour a few in and then get cooking. I always look to start with 50% of the quoted cooking time for oven cooking and then go from there, usually up to around 2/3 of the cooking time for the crispiest hash browns.

While you’re here be sure to check out my air fryer tips and tricks. Whether you’re a total beginner to air frying they’re great to help you get the most from your machine.

A bag of frozen hash browns. Surprised you I’m sure!

Your choice of toppings for when you serve them. Sometimes I use them as a sandwich, placing air fryer bacon in the middle of the hash brown patties. I also love to serve with brown sugar bbq sauce or just good old tomato ketchup!

You can buy just about any brand or type that you like. We also love air fryer frozen onion rings, so we buy those too sometimes to cook at the same time.

Cooking frozen food in an air fryer is more convenient and quicker than using a conventional oven. A lot of frozen food items come pre-coated with breadcrumbs or batter. They also have lots of seasonings added already, which means you don’t need to prep them at all, just throw some in your air fryer and get them cooking.

The coating for hash browns is usually oil, such as sunflower oil, which is why you don’t need to pre-heat the air fryer basket or pre-oil it either.

Frozen hash browns crisp up beautifully in the air fryer, as this is designed to cook things in confined space, and it’ll help you get your breakfast ready even faster in the morning.

Halfway through that cooking time I will give the basket a good shake, or turn over the hash browns with tongs. I always wear oven gloves when doing this, as I’ve accidentally burned myself a few times on the Ninja Foodi basket now.

If the hash browns are beginning to brown then after the halfway mark I’d just add a couple of minutes and then check back every 1-2 minutes, as they’ll turn brown very fast once they’re cooked.

I find that 10 minutes at 180C is usually sufficient for most frozen hash browns, and this is similar to cooking air fryer frozen chicken nuggets, which is great if I want to make a fast, simple tea for my girls before bed.

How to air fryer frozen hash browns in Ninja Foodi:

The Ninja Foodi has an air crisp setting, which is the same as air frying, so just follow the method documented in this post and you’ll be grand.

I actually created this post using my Ninja Foodi, and cooked the featured food in my OL750UK which I recently purchased.

How long does a hash brown take to cook in the air fryer?

I find 10 minutes is usually grand. Sometimes a little less. If you’re cooking defrosted or fresh ones then you’ll want to check out my air fryer hash browns recipe instead. Likewise check out my oven baked hash browns if you don’t have an air fryer.

Absolutely! They are SO crispy and delicious, and I’ve just never been able to get them this crispy when cooking in the oven.

Can you cook other foods at the same time as air frying hash browns?

My air fryer basket has a little rack that allows me to stack up foods, and get a little more surface area.

I make sure not to over crowd the air fryer basket, as that prevents things cooking as well, but I often cook entire meals, minus the veg or sauce, in my air fryer in one go. I’ll cook lots of ‘freezer tapas’ this way such as nuggets, fish fingers, chips, etc. You can also cook things like air fryer green beans or air fryer carrot fries too if you want something a little healthier.

All work great, obviously you’ll want to keep an eye on the timings and ensure that everything finishes together, or cooks on a similar temperature, but this is really simple with the air fryer.

What are the best hash browns for air frying?

I often buy the Tesco frozen ones, but I also love the Aldi rectangle ones which are apparently a dupe for McDonalds, and taste pretty darn close when you air fry them until they’re crispy and delicious!

Do you need to defrost frozen hash browns before air frying?

No, I don’t recommend you do this at all.

Looking for some other suggestions to serve with your frozen hash browns, ideally made in the air fryer?

I’m Katy, 34. I am married to Thomas and we have two daughters, Daisy and Aurora. I love to share my views on parenting, products, family life, personal finance and much more. I enjoy helping people make money, save money and change their lives for the better. 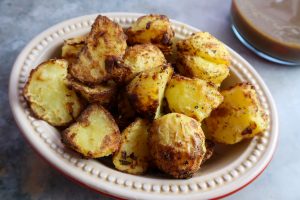